Learn more about Penn State’s reputation as an international leader in the research, development and clinical use of heart pumps and artificial hearts. 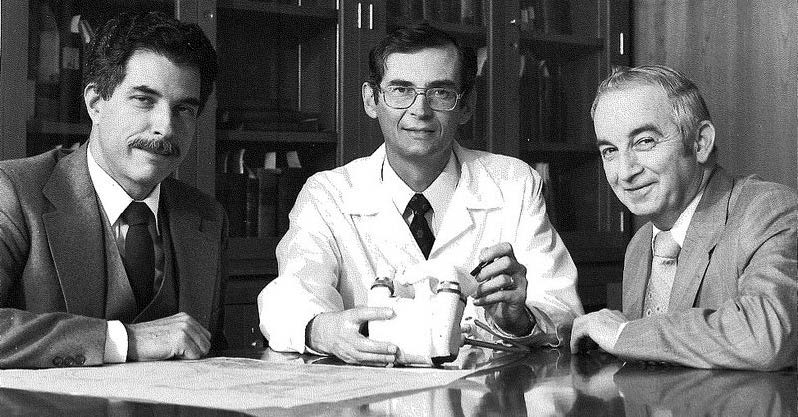 The Division of Cardiothoracic Surgery was one of the earliest surgical divisions established at Penn State Health Milton S. Hershey Medical Center in the 1970s. Dr. John A. Waldhausen, the Department of Surgery’s founding chairman, asked a young University of Pennsylvania School of Medicine graduate, Dr. William S. Pierce, to join the ranks of new faculty. He tasked Pierce with establishing the division, as well as developing a heart research program that included an animal research facility.

The Penn State Heart-Assist Pump, a pneumatic device, began development under Pierce’s tenure. Initial collaborative efforts included the faculty of both the Penn State College of Medicine and Penn State College of Engineering. Pierce proved to be the driving force in developing a multidisciplinary group for the design, fabrication, and evaluation of heart assist pumps and the artificial heart. Pierce’s team included Gerson (Gus) Rosenberg, a mechanical engineering graduate student, and Penn State mechanical engineers John Brighton and Winfred Phillips, along with a fabrications specialist, James H. Donachy.

In 1976, the team’s efforts proved invaluable when Pierce attached the pump to the heart of a young woman not able to come off of the heart-lung machine following an open-heart surgical procedure. The moment the device was connected, her heart began pumping blood. Within a matter of days her heart had recovered sufficiently that she could be removed from the machine and discharged home.

By the 1980s, medical facilities across the nation were requesting the Penn State Heart-Assist Pump. The team pushed forward to further perfect the device and commercialize it for implantation. It proved instrumental to those who could use it as a “bridge” to sustain their weakened heart while awaiting transplantation. By 1984 the device was in wide-spread use.

The American Society of Mechanical Engineers designated the pump as an International Historic Mechanical Engineering Landmark in 1990. By that time the device had already provided circulatory support for over 250 patients without a single device-failure-related fatality. The Penn State Heart-Assist Pump’s design and operating principles created a solid foundation for heart-assist research at Penn State and elsewhere, ultimately saving lives and significantly improving the quality of life for many.