Scientist at bench in a lab

Use the buttons below to learn about Dr. Coates and his team. 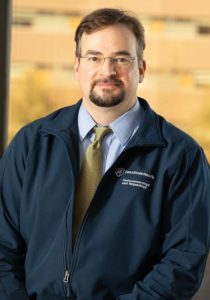 Over the course of his career, he has focused much of his effort evaluating gastrointestinal serotonin, neurotrophic and other signaling systems in the context of IBD and other inflammatory disorders of the gut. He is also very interested in how these factors impact visceral sensation and other key functions of the gastrointestinal tract.

His laboratory utilizes a variety of innovative molecular techniques, such as next-generation genomics, immunohistochemistry, immunoassays, and functional techniques, such as quantitative sensory and visceromotor testing, to investigate these issues. 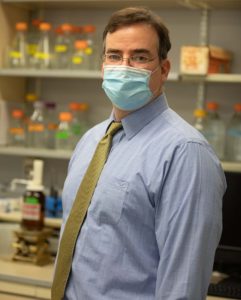 Dr. Coates started his biomedical research career at the University of Vermont College of Medicine, where he completed his PhD (2005) and MD (2007) as well as a residency in Internal Medicine (2010).  During that time, he worked in the laboratory of Dr. Gary Mawe and secured a Ruth L. Kirchstein NRSA Fellowship to study the influence of serotonin signaling in irritable bowel syndrome (and other disorders of the gut).  Dr. Coates went on to complete a T32 fellowship in Gastroenterology & Hepatology at the University of Pittsburgh Medical Center (2013), training with Drs. Klaus Bielefeldt and Brian Davis to investigate the underlying drivers of abdominal pain in inflammatory bowel disease (IBD).  After continuing this work as an Assistant Professor at the University of Pittsburgh College of Medicine and Pittsburgh VA Medical center for two years, Dr. Coates joined the faculty in the Division of Gastroenterology & Hepatology at the Penn State College of Medicine in 2015.  Since joining Penn State, Dr. Coates has been investigating abdominal pain disorders of the gut and has secured a NIH NIDDK R01 award to study the role of a particular voltage-gated sodium channel (NaV1.8) in the pathophysiology of hypoalgesic (“silent”) IBD. He has also helped to develop The Penn State Gastroenterology Data Registry and Biobank and currently serves as the director of this resource (which is designed to promote collaborative and innovative translational scientific research relating to digestive disease). 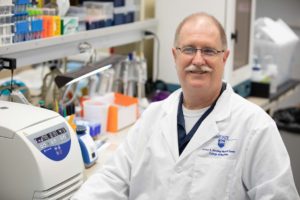 Senior Laboratory Technician for the Gastroenterology Data Registry and Biobank

Jeff received his Bachelor of Arts degree in Biology from Messiah College in 1985. He has worked in research at Penn State College of Medicine since 2004. Over that time, he has developed a variety of skills in protein and genomic techniques as well as functional assessments of pain perception. Prior to his time at Penn State, Jeff worked in laboratories at a flour mill, fiber optic connector business and a pharmaceutical company. He is a native to Central Pennsylvania, and has lived in Lebanon County for most of his life (aside from a brief period of time spent in Hawaii in his youth). 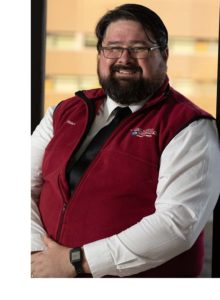 August grew up in California and Hershey, PA. He earned his Bachelor of Arts degree from Dickinson College and a Master’s degree in cancer biology from Georgetown University. August has been working at the Penn State College of Medicine since 2009 and has been working with the Gastroenterology & Hepatology Division since 2015.

Our laboratory serves as the “home base” for this important initiative whose primary mission is focused on providing better care to individuals suffering from digestive diseases through the development and implementation of innovative biomedical research. We recruit individuals who receive care in our clinics to participate in this project. Study participants provide health-related information (via interviews and surveys) and/or biological specimens ranging from gastrointestinal biopsy samples to blood, sputum, urine and/or stool (all during routine, scheduled care visits). As a result, we are able to undertake high quality, novel investigations evaluating essentially any gastrointestinal disorder (including irritable bowel syndrome, pancreatitis, celiac disease and the inflammatory bowel diseases).

Silent inflammatory bowel disease (IBD) is a common and poorly understood phenomenon associated with serious complications and increased healthcare resource utilization. We received a NIH (NIDDK) R01 award to examine the potential role that the voltage-gated sodium channel, NaV1.8, and the functionally relevant, associated polymorphism, rs6795970, play in this condition (link to story about this award). As part of this investigation, we are genotyping study participants and assessing pain experience using special surveys and objective assessments of pain perception (including quantitative somatosensory and visceral sensory testing techniques). Findings from this research will be used to develop more objective diagnostic tools to identify patients at risk for silent IBD, and new management strategies to help individuals suffering with disorders associated with altered abdominal pain perception.

Cannabis has demonstrated analgesic properties in animal models of enterocolitis and in human inflammatory bowel disease (IBD) studies, but it is unclear which component(s) is/are responsible for these effects.  In coordination with Drs. Kent Vrana and Wesley Raup-Konsavage in the Penn State College of Medicine Department of Pharmacology, we are undertaking studies designed to investigate the role of non-euphorigenic cannabis components in visceral nociception in order to identify potential new targets and therapies to manage abdominal pain in IBD and other related disorders.

In addition to the laboratory-based research projects described above, Dr. Coates is involved in a broad number of clinical research projects focused on inflammatory bowel disease (IBD), with a particular focus on abdominal pain in this setting.  Utilizing the database described above, Dr. Coates and his colleagues have investigated a wide array of issues related to IBD.  A list of his publications related to these topics can be found here.

For Current and Potential Study Participants

Thank you for your interest in participating in research!

News from Gastroenterology and Hepatology